Ajay and the Mumbai Sun 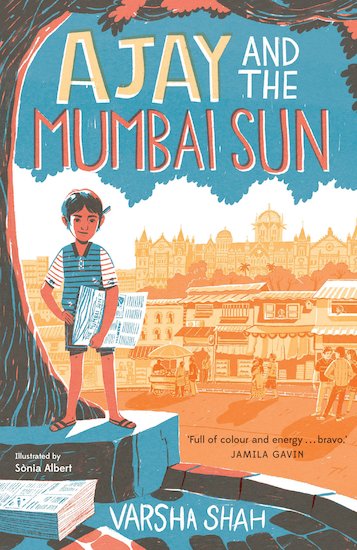 ‘Ajay is the most intrepid young reporter since Tintin, caught up in a gutsy and moral adventure to find and tell the truth. This sensational debut is full of outrage but full of warmth and friendship too.’ KEITH GRAY

‘Exhilarating and heartwarming – a story that shows the true power of the pen. Shah’s tremendous talent shines on every page.’ CARLIE SOROSIAK

Abandoned on the Mumbai railways, Ajay has grown up with nothing but a burning wish to be a journalist.

Finding an abandoned printing press, he and his friends Saif, Vinod, Yasmin and Jai create their own newspaper: The Mumbai Sun.

As they hunt down stories for their paper, the children uncover corruption, fight for justice and battle to save their slum from bulldozers.

But against some of the most powerful forces in the city, can Ajay and his friends really succeed in bringing the truth to light? Not to mention win the most important cricket match ever …

A high-stakes adventure story full of heart, written against the backdrop of modern India: Emil and the Detectives meets Slumdog Millionaire

730L Lexiles are the global standard in reading assessment. They are unique as they are able to measure a child and a book on the same scale – ensuring the right book gets to the right child at the right time.