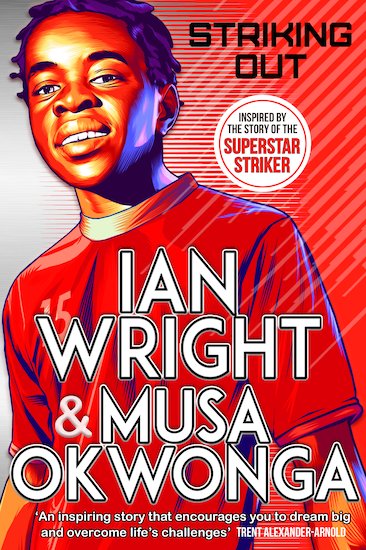 Buy this and your school gets €10.00 to spend on books Orders of €20 or more will earn 20% of your order value back in Scholastic Rewards for your school.

From the winning writing team of Ian Wright and Musa Okwonga.Inspired by the story of the superstar striker, Ian Wright.

“A thrilling book … an uplifting story about triumph against all odds.” ... “You don’t have to be a football fan to love it!” David Walliams

Thirteen-year-old Jerome Jackson dreams of becoming a world-class footballer. But with a difficult home life, Jerome can’t see how he’ll ever make this dream come true … until he meets a mentor figure who can hopefully put him on the right track. “The best strikers aren’t the most skilful ones. They are the ones who never give up.”

“This engaging and uplifting novel, which celebrates friendship and community, is based on Ian Wright’s own childhood experiences and will appeal to any aspiring sportsperson.” Booktrust “An inspiring story that encourages you to dream big and overcome life’s challenges.” Trent Alexander-Arnold

Ian Wright is one of the UK’s all-time leading goal scorers. He’s lifted the Premier League title, The FA Cup, the European Cup Winners’ Cup and won the Premier League golden boot. Musa Okwonga is an author, poet, journalist and musician; he is a co-host of the Stadio football podcast.

END_OF_DOCUMENT_TOKEN_TO_BE_REPLACED

END_OF_DOCUMENT_TOKEN_TO_BE_REPLACED
How do I use promotional codes