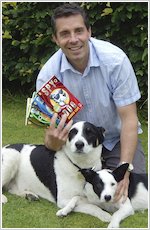 Andrew Cope was born in Derby in 1966. He is a teacher, writer, a huge fan of Derby County football club and author of the Spy Dog and Spy Pups series. He really does have a dog called Lara who has one sticky-up ear and came from the RSPCA, but he’s not sure if she is actually a highly trained secret agent. Andrew lives with his wife and two children. 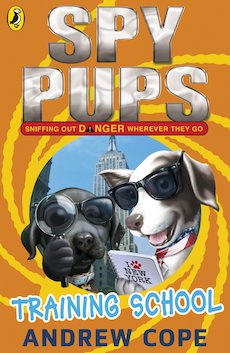 Andrew Cope has won several awards for his Spy Dog series, especially those voted for by children. These include the Richard & Judy prize, Red House award, and Nottingham and Doncaster Children’s Book Prizes.

Place of birth and birthday

Born in Derby, in the same year that England won the football world cup

Beautiful Day by U2. Or Shine by Take That. Both songs make me grin.

Lots… A Bug’s Life (because Hopper is the best baddie ever), Ice Age 2 (because of the little fella chasing his acorn), Garfield (because of his swagger and rudeness), Monsters Inc (because of Sully’s facial expression right at the end when he sees Boo again), Pay it Forward (because it’s about random acts of kindness). But my all time favourite movie is ET. A very simple story and a superb soundtrack

My pet piglets, called Hargreaves and Rooney. They are ginger and black and I call them ‘my boyz’. ‘Cute’ is an understatement

When did I start writing

I wrote my first book in 2005 (at the grand old age of 37) so I guess I was a late developer. I did write a really silly football book in the late 1990s but everyone laughed and said it was rubbish (which is probably was). I am only a part-time author, writing in the evenings after the children have gone to bed

I wrote the first Spy Dog book with such enthusiasm that it just came out in 1 long sentence. It took 2 weeks to get all the ideas down and then another 2 weeks to go through and correct all the mistakes. Puffin have asked me to write 5 Spy Dogs and I’m currently thinking through ideas for the 5th book. I’m not quite sure how to finish the whole thing off?

I always describe myself as an ‘accidental author’. The idea for Spy Dog came after watching a James Bond film and then wondering out loud whether Lara, our pet mutt, could actually be a super sophisticated secret agent, who was just pretending to be ‘normal’. The real Lara is a rather pathetic excuse for a dog with no talent whatsoever. Or, could it be that she is just hiding that talent, just like a secret agent has a double life. She has one sticky up ear. Could that mean she’s always on alert, listening for baddies? The kids laughed at me but I thought it was a really good idea. So I tapped the ideas out on my laptop and read them to my daughter. She really liked the story so I decided to try and get it published.

I have also written a book aimed at teenagers called A Brilliant Life. The idea for this came from the Innocent Smoothie carton, which was so simple and uncluttered that it made me think about writing something dead simple for you guys.

1. Choose to be a positive and passionate person (and stay that way!)

2. Write your book and make it as brilliant as possible

3. Never ever give up. You have to be determined and you have to take action. Your book will not get published while you sit watching EastEnders!

Can I choose more than 1?

1. North Devon holds some glorious memories and we try and get back there at least once a year. I’m learning to surf.

2. I’ve recently worked in South Africa and this is also a wonderful place. Like North Devon but warmer, the waves are bigger and it has lions!

3. Pretty much anywhere in the UK on a chilly Autumn morning. Best if it’s a bit misty

Writing (obviously). I love music (almost anything except German opera, soul and hip hop). I am a sporting nut, especially football. Most Saturdays are ruined because I support Derby County! I also love learning new things and often have my head in a self help book

What would I have been?

Remember, I’m only a part-time author. I have a superb day job, training business people and teenagers in weird and wacky stuff like positive psychology, potential and achieving huge unbelievably great goals. I’m lucky that it’s the best job ever and takes me all over the world.

When I was at school I dreamt of being a professional footballer and playing for Derby County. I can close my eyes and picture it…I was going to be the star player and all the big clubs would try to sign me for squillions of pounds. But I’d refuse to move, staying loyal to my home town team. The reality was that at age 15 they did give me a trial but I ruined my knee and that was the end of that. But life’s too short to mope so I moved on to dream number 2.

Reproduced with thanks to Puffin Books.