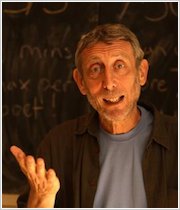 Michael Rosen was born into a London Jewish family, the son of two distinguished educators – Connie and Harold Rosen. Michael’s childhood was rich in books, stories and conversation.

Michael attended Middlesex Hospital Medical School for a year but transferred to Wadham College, Oxford to study English Literature. At Oxford, he started to realise his ambition of acting (as well as writing and directing). Michael still says that if he wasn’t a poet, he’d like to be an actor. Anyone who has seen him in performance knows that he already is!

The narrowness of his course of study proved a source of dissatisfaction and Michael began looking outside his recommended reading to contemporary working, class ballads. He retains a passion for street rhymes, popular songs and folk stories.

Michael Rosen has been writing poetry since the age of 18. His first collection, Mind Your Own Business, was published in 1974. Although it was not planned as a collection for children, it appeared on Andre Deutsch’s children’s list. This, says Michael, was a turning point – “Suddenly it all fused: the writing, the performing, the popular audience. It was just incredibly exhilarating.”

He quickly made a name for himself with his collections of humorous verse and picture books for children. He is described as one of the most significant figures in contemporary children’s poetry, drawing closely on his own childhood experiences, and ‘telling it as it was’ in the ordinary language children actually use.

Michael is now a poet, author and broadcaster, and was Children’s Laureate from 2007-2009.

Michael won the Nestle Smarties prize for We’re Going On a Bear Hunt. He was awarded the Eleanor Farjeon prize for services to Children’s literature in 1997, and was Children’s Laureate from 2007-2009.

How do you think of such good stories?

I think of two kinds of stories: some are the ones that really happened to me. They’re easy to think of because it’s just me remembering things. The other kind of story, where I make up things, is much, much harder and to tell the truth, I don’t think I’m very good at it. I get it right sometimes, but often I get it very wrong, and the people who make books, tell me that I’ve got it wrong!

How do you think of your book titles?

That’s like thinking of anything. You’re probably very good at thinking up new things to do, or interesting places to go. Well, it’s a bit like that with book titles. You just sit and think for a bit, and when a title comes into your mind, you write it down.

Do you write with a pencil or a pen?

I usually write with a ball-point pen in my notebooks.

Do you drive a van?

How do you think of the funny things to put in your poems?

Most of the funny things in the poems are funny things that have happened to me. Sometimes I think of funny things to do with words. That’s just because I’m one of those people who thinks about words.

How do you know all those funny words?

When I was a boy, my mum and dad said lots of funny things and they could speak other languages. So I got to think about that, and I thought I would like to do things like that. So I can say words in other languages other than English and I can remember lots of rhymes and funny things to say.

Do you know my brother, his name is Matthew Rosen, my name is James Rosen.

Hello James and Matthew. No I don’t think I do know your family, do I? I know all the people called Rosen in this country who are related to me. There are lots more in the USA.

Did you know that my favourite book is We’re Going on a Bear Hunt? I like the bit were they forget to close the door when the bear is chasing them.

I’m glad you like that bit. I made that bit up. Some of that book is what you might call a ‘folk tale’ or ‘folk song’ which means that it was made up by ordinary people sitting about having a good time a long time ago and no one knows exactly who. There are lots of different ways of singing or saying ‘Bear Hunt’. My way is just one other way.

To tell the truth, they’re not so beardy or whiskery these days. I use my shaver on them every day, and that makes them a bit short and bristly. My daughter says that I’m all prickly when i kiss her good bye in the morning.

Do you like hot school dinners or packed lunch?

When I come to schools, I like hot school dinners.

What is your favourite book?

What do you want to be when you get older? I want to be a firefighter.

I would like to be a poet. I hope you get to be a firefighter.

This interview originally appeared on Michael’s website. Questions from children in Year One at Purbrook Infant School.