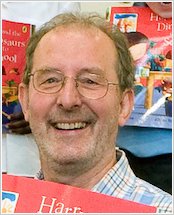 Ian Whybrow is the best-selling author of over 100 children’s books, and is best known for his much-loved Harry and the Bucketful of Dinosaurs books. He is now published in 27 languages in 28 countries!

Before he took up writing full time, Ian spent most of his working life in secondary education, mostly as Head of English and Drama and later as Head of Sixth Form.

Ian’s books are full of inventive and original humour and always writes with adult readers as well as youngsters in mind. “I loved being read to as a child,” he says. “And I loved the sense that my mother and father were enjoying themselves too. For me, that’s the acid test for any good book -that there’s something in it for everyone to enjoy.’

Apart from his wife and daughters, his passions – in no particular order – are: Herefordshire, where he retreats to write in a deeply rural Victorian villa; digging; walking with friends; swimming; cycling (especially in France); the poet Stevie Smith; the theatre; books, films and hedgehogs.

Harry and the Bucketful of Dinosaurs won the Sheffield Chidren’s Book Prize in 2000.

I was born in Gillingham, Kent but I’m not telling you when.

Great Expectations was the first great book I ever read, so it made a deep impression.

The first song that comes into my head was Moon River, so I’ll stick with that for the moment, in spite of the fact that Heartbreak Hotel, Don’t Be Cruel, the Sergeant Pepper album, Satisfaction and Good Vibrations are crowding in as I type…

On the Waterfront. No screen actor has ever given a better performance than Marlon Brando does in that film.

A carved box made from a piece of wood from Shakespeare’s birthplace in Stratford given to me by Mrs Penny next door when I was ten. She paid me a great compliment: “There you are. You like Shakespeare, I expect.” I’d never (consciously) read a word at the time, but I thought it was very nice of her to think that I might one day.

When did you start writing?

I’ve written ever since I can remember. My first successful book for children was published in 1989. It was called The Sniff Stories. (It’s since been reprinted as Sniff.)

The immediate inspiration for The Sniff Stories was The Secret Diary of Adrian Mole, by Sue Townsend (1st person narrative, fish-finger sized chapters, English, funny, domestic). Other influences were JD Salinger (for his voices and for the way he can convey natural, spoken language); Stevie Smith, GM Hopkins, Dylan Thomas (all for their oddness, their pleasure in finding new ways of using words and in the sounds of words and voices), John Burningham, Maurice Sendak and Helen Oxenbury (for their picture books that I was happy to read over and over again with my children); AA Milne, Kipling’s Jungle Book, and Alice in Wonderland for their warmth, peculiarity, humour and rhythm.

Nothing you write is ever wasted – even the rejected stuff. Get an agent Keep going

Herefordshire – it’s beautiful and tranquil and as yet undiscovered. Shhhhh.

What would you have been if you weren’t an author?

Reproduced with thanks to Puffin Books.