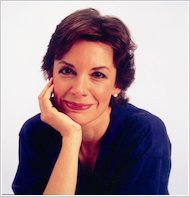 Born in Malawi to a Belgian mother and a father Michelle Paver moved to the UK when she was three. She grew up in Wimbledon and, following a Biochemistry Degree from Oxford, she became a partner in a City law firm. Eventually, she gave up her career in law to follow her long-held dream of becoming a writer. Successfully published as an adult author of historical fiction, Chroncicles of Ancient Darkness are her first books for children.

The first book I remember looking at was a big illustrated book about Stone Age people, although at the time I was too young to read the captions. Two of the first books I actually read were Finn Family Moomintroll by Tove Jansson, and a terrifically exciting adventure about a horse, called The Sagebrush Sorrel. I’ve still got all three books.

What’s the greatest influence on your writing?

Concerning literary influences, I’d name two principal ones: J.R.R. Tolkien, who inspired a lifelong love of myth and Anglo-Saxon and Norse literature, and who also deepened my appreciation for trees and forests; and Anthony Trollope, whose page-turning novels taught me much about storytelling.

Concerning non-literary influences, I’d have to name my parents, who ensured that I grew up surrounded by books (despite not having much money at the time), and who always encouraged me to follow my interests and take risks, while somehow managing to instill a bit of commonsense about how far to go!

I scribble the first version of each chapter on a pad with a rollerball pen, but it’s such a scrawl that I can only read it while it’s still fresh in my mind, so I try to type it onto the wordprocessor on the same day. Then I go over it a few times on the computer before moving on to the next chapter, and so on.

They change from time to time, but here are the ones that have lasted. For heroes, it’s Aragorn from The Lord of the Rings and Hector from The Iliad. For villains, it’s Dracula (the Bram Stoker one, of course), and Stavrogin from The Devils.

Where were you born and raised?

I was born in Nyasaland (now Malawi), but came to England when I was small, and lived in Essex till I was eight, when we moved to Wimbledon. Apart from a couple of years in central London, I’ve lived there ever since.

Did you enjoy school? What is your most vivid memory of your school years?

In the main I did, but my most vivid memory concerns my one bad year. When I was about eleven, a new girl joined the class and took such a dislike to me that she got everyone else to gang up against me. It doesn’t sound too bad, but it was miserable and very lonely to go through. My mother told me to ignore the lot of them, which I did – and after a pretty rough year, the ringleader left, and things drifted back to normal. But I’ve never forgotten it. And it probably helped make me a writer, because for that year, I retreated into my imagination.

What were the first pieces of writing that you produced? – e.g short stories, school magazine etc.

I wrote my first stories on my mother’s typewriter when I was five. I’ve still got some of them. One was about a rabbit called Hamish and a Tyrannosaurus Rex. Another, Ebany the Mouse Goddess, concerned a tribe of mice who burrowed to safety beneath an oncoming glacier. At school I wrote several plays, including one about the murder of Tutankhamun, and another about a family of cavemen.

What jobs did you have before you started writing?

I worked as a solicitor in the City for thirteen years: lots of all-nighters and weekends in the office. The challenge made it fun for a while, but that soon palled. I don’t miss it at all.

If your house was burning down what would you save?

Nothing. I’d just try to get out alive. (And lest anyone think me callous, I should add that I don’t have any pets!)