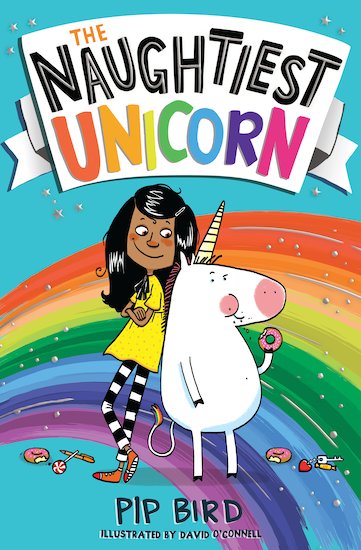 Join the naughtiest unicorn for magic and mayhem in this hilarious series for 6+ fans of Pamela Butchart, Rabbit and Bear, The Worst Witch and UNICORNS!

Mira CAN’T WAIT to start Unicorn School. (Her big sister goes and won’t stop going on about it). But when Mira arrives on her first day all the unicorns are gone . . . except Dave!

Dave isn’t quite the sparkly unicorn Mira was expecting to find at the end of the rainbow – he’s more grumpy than glittery, more interested in lunch than magical Quests and he always runs off when Mira tries to ride him – but Mira’s not going to let that get her down. Along with her new friends and their (much more glittery) unicorns, she is determined to be the best at Quests and protect the special unicorn world!

Perfect for fans of The Worst Witch, The Pug Adventures, and Pamela Butchart.

Pip Bird is a children’s author living in London. When she’s not writing magical stories, she dreams of going to Unicorn School and having her own Unicorn Best Friend.