Aziza's Secret Fairy Door Share a story this May 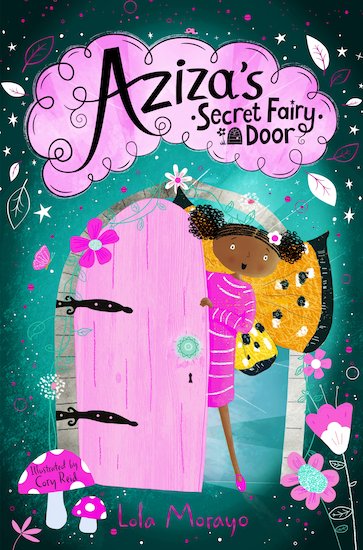 Aziza’s Secret Fairy Door is the first title in an inclusive magical adventure series, perfect for readers of 6-8 from debut author Lola Morayo. It is inspired by world mythology and is gorgeously illustrated in black and white throughout by Cory Reid.

Open the door to a world of magic and adventure . . .

A mysterious gift arrives on Aziza’s birthday. It is a secret fairy door that will whisk her away to Shimmerton, a magical world with princesses, naughty fairies, shapeshifters, unicorn shopkeepers and mischief around every corner. But when the precious jewelled doorknob is taken, Aziza is trapped. Will she ever see her home and family again? Maybe her new friends, Peri and Tiko, can help . . .

Packed with mischief, friendship and magic, Aziza is perfect for fans of Isadora Moon.

For June’s Book of the Month for children aged 7 to 8, I have chosen Aziza’s Secret Fairy Door. On Aziza’s birthday a mysterious gift arrives from an unknown sender – a secret fairy door! It whisks her away to the magical world of Shimmerton, filled with princesses, naughty fairies, shape shifters, unicorn shopkeepers and mischief around every corner. But when someone steals the jewelled doorknob, Aziza is trapped in Shimmerton! Will she ever escape to see her home and family again?

This debut from author Lola Morayo is the first title in a new series, with the next instalment coming in just 4 months so keen readers won’t have long to wait! It’s an inclusive Own Voices series, inspired by real world mythology. Gorgeously illustrated throughout in black and white by Cory Reid. Packed with mischief, friendship and magic, Aziza is perfect for fans of Isadora Moon and Rainbow Magic.

END_OF_DOCUMENT_TOKEN_TO_BE_REPLACED
How do I use promotional codes