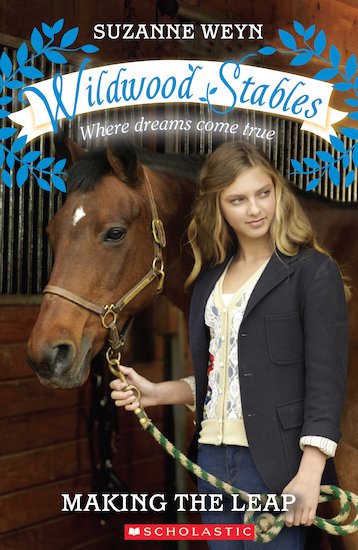 When one of Taylor’s best friends, Daphne Chang, is offered the chance to ride by a rival stable, Taylor isn’t at all surprised. Daphne is a brilliant horsewoman. But as pleased as Taylor is for her friend, she can’t help wondering if this means trouble for Wildwood Stables. 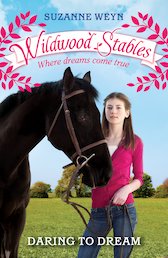 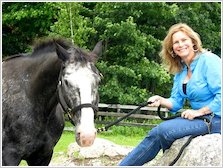 Suzanne Weyn grew up in Williston Park, Long Island, New York. She has three sisters and a brother. As a girl she was very interested in theater and in reading. Louisa May Alcott was her favorite author. Suzanne lived pretty close to the ocean and going to Jones Beach was one of favorite activities. Even today, if she goes too long without seeing the ocean, she starts feeling restless.

Suzanne now lives in upstate New York with her husband and two daughters. Her house is at the edge of the woods and is nearly 200 years old.

Suzanne’s most recent novels include The Bar Code Tattoo (2004) and The Bar Code Rebellion (2006). They are set in the near future based on the premise that everyone is branded with a bar code. The Bar Code Tattoo was selected by the American Library Association as a Quick Pick for Reluctant Young Adult Readers and was a 2007 Nevada Library nominee for “Best Young Adult Fiction”. It is currently translated into German and was nominated for the 2007 Jugenliteraturpreis for Young People’s Literature. The Bar Code Rebellion continues the story, taking it into new areas, including cloning and nanotechnology. Suzanne’s other books for young adults include The Night Dance, Water Song and The Crimson Thread.

Her most recent title is the mystical historic romance, Reincarnation, from Scholastic Press. Suzanne says, “This was an idea that had been in my mind for quite a few years. I’d noticed that there is so much about people that just doesn’t make sense a lot of the time. Why does a person have a passion for a certain subject or period of history? So much falls into place if there is a former life lying just below a person’s conscious memory.

“It really doesn’t matter if a reader believes in reincarnation in order to enjoy the story. I hope readers will be able to put any doubts they might have aside and throw themselves into the narrative. It’s about reincarnation but also so much more.”