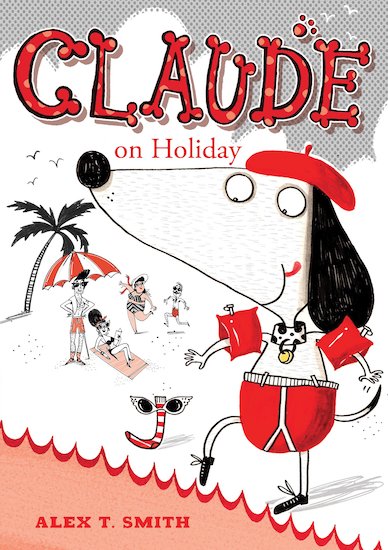 Meet Claude, the ordinary dog with an extraordinary life. Now the star of his very own TV show on Disney Junior and ITVBe!

Sir Bobblysock and Claude go on holiday for the very first time. They build sandcastles, eat ice cream and sunbathe. It is all very normal until … Claude meets a band of pirates and discovers buried treasure.

The second book in this hilarious bestselling series. Perfect for new readers and also great for sharing!

Praise for the Claude series: ‘Illustrated with humour and elegance’ The Times ‘With quirky illustrations and plenty of humour’ Metro

Claude in the City was shortlisted for the Waterstones Children’s Book Prize and selected for the Richard and Judy Book Club. Claude Going for Gold won the Sainsbury’s Children’s Book Award. Alex T. Smith was the official World Book Day illustrator in 2014. 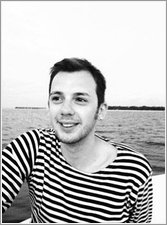 Alex T. Smith was born in 1985 and has drawn and written stories since he could hold a pencil.

After considering several career options (space traveler, cake maker, professional rabbit), Alex decided to train to do the job he’d wanted to do since he was five – a children’s books illustrator.

Alex graduated with a 1st Class Hons degree in Illustration and, having won second place in the Macmillan Prize for Children’s Picture Book Illustration in his final year, began working on his first commission as he put his degree show up!

Since then Alex has gone on to write and illustrate his own books – many of which have won prizes and have been read on TV during the Bedtime Hour on CBeebies, as well as illustrating books for several different authors.

When not working, Alex enjoys doodling in his sketchbook, reading, people-watching and eavesdropping. He is also a big fan of cake and a nice cup of tea and a sit down.

He lives with and under the constant ‘supervision’ of his canine companions – two very tiny, very naughty chihuahuas (Coco and Mr. Bongo) and an ancient and very bossy Yorkshire Terrier, Lucy Locket.