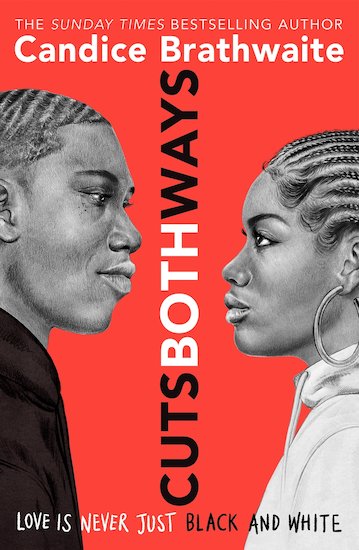 A sharp and authentic love story about 16-year-old Cynthia, who finds herself caught between two brothers: one who is Black and the other who is white. Tackling the complexities of growing up Black and British, Cuts Both Ways is the first fiction title from the Sunday Times best-selling Candice Brathwaite, author of I Am Not Your Baby Mother.

London is everything to Cynthia, so when her parents move her to a place where there is only one bus an hour and the faint smell of horse manure continuously permeates the air, it’s a culture shock, to say the least. As is transitioning to a private school.

At her new school, Cynthia immediately finds herself caught between two brothers – head boy Thomas, who is white, and his adopted Black brother, Isaac. There is something about Isaac she cannot quite get enough of … but her father wants her to partner up with someone like Thomas, someone who will be ‘better for her future prospects’.

When it turns out the brothers have been keeping secrets from her, secrets that link back to the life Cynthia thought she had left behind in London, she realises that not everything is as it seems.

How can Cynthia follow her heart when it’s being torn in two?

An exploration of race, class, love and the complexities of growing up as a Black British teen, from bestselling author Candice Brathwaite.

Our August 2022 Teen Book of the Month

Our Teen book of the month for August is Cuts Both Ways by bestselling author Candice Brathwaite. It follows 16-year-old Cynthia, a young Black girl from London, as her family move to the countryside after her brother is brutally murdered. The biggest culture shock is her transition to private school, where she finds herself torn between head boy Thomas, who is white, and his adopted brother Isaac, who is Black. Although she’s falling for Isaac, her father would rather she was with someone like Thomas instead, someone who will be ‘better for her future prospects’. When it turns out both brothers have been keeping secrets from her that link back to what happened in London, Cynthia will learn that love is never just black and white…

This sharp and authentic young adult love story brings to the forefront important issues such as race, class and the complexities of growing up Black in Britain today. It will make you laugh one minute and cry the next. Cuts Both Ways is told from the perspective of those who are left behind after such tragic events and shines a light on the prejudice they are subjected to. The text is accessible, gritty and authentic, making this the perfect book to use as a tool to spark discussions amongst teens about these important issues that are very much still prevalent. It’s perfect for fans of Malorie Blackman, Elizabeth Acevedo and Danielle Jawando. Previously a bestselling adult author, this is Candice’s first foray into YA and we could not be more excited to add her fiction debut to our “to be read” pile!