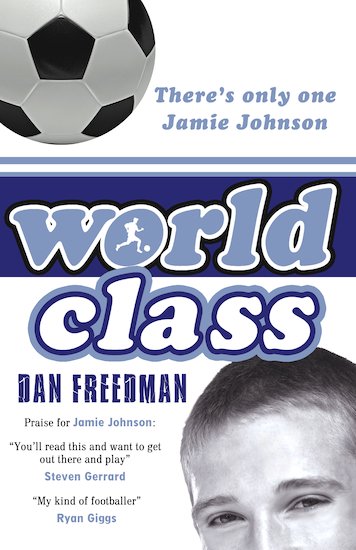 One other format or edition for €7.30

It’s the big one! The World Cup Finals beckon for Jamie Johnson but first he must answer a huge question: Which country will he play for? With brand new characters and all the trademark jaw-dropping footy action, Dan Freedman and Jamie Johnson return on very top form for the fifth book in the series. 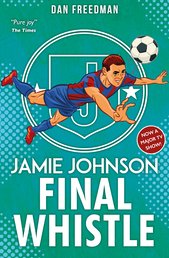 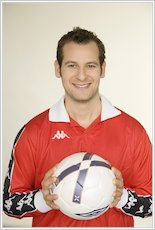 I was born in London in 1977 but my early writing career got off to a pretty rocky start. At my nursery school I used to write my words so close together that they got all jumbled up and no one could read them.

To be honest, my football career didn’t kick off brilliantly either. My parents were divorced when I was very young so my dad thought that, when he saw me, taking me to football matches would be a good idea. But I was only about four or five. It was quite scary and I didn’t like it at all. I used to plead with him to take me home so I could watch Buck Rogers on TV. But we both persevered and that’s where the football seeds were sewn. These days it’s me that drags him up from Brighton so we can watch games together.

By the time I joined school, football was pretty much the centre of my life. I never thought I was obsessed – I just liked it a lot – but those around me thought I was.

But I wanted to prove that I could be successful and still focus on football. So, during school and university I started to build a pretty decent CV for myself. I did work experience at, among other places, Arsenal FC, Radio Five LIVE, Carlton TV, The Mail on Sunday and Sky Sports. I’d worked out that if I wanted to get a job in football, I’d have to prove my ambition to people. Otherwise, I’d just sound like every other football mad kid: “I want to work in football.” You have to stand out from the crowd in some way if you can.

My CV came in handy when, in 2000, after I’d graduated and gone travelling around Australia and New Zealand, I wrote to The FA to see if they had any vacancies. They called within a couple of days and said they were actually recruiting for graduates at that very time. What luck!

Thankfully I got the job and it has lead to some unbelievable experiences. As Editor of The FA my job around the England Team is bring to life for the public what goes on behind the scenes and to give the players and coaches the platform to talk directly to the fans. The most important thing is getting the players to trust you, to understand you’re on their side.

It was when I wanted to buy a present for an 11 year-old football mad boy that the idea to write this book actually struck. There didn’t seem to be a football novel for kids. I couldn’t understand it. I know that if someone had given me one when I was 11, I probably would have read it in two days flat.

I also knew that writing about football was something that I could do. So I did it.