Philip's Junior School Atlas Save 20% on selected books and resources in our September sale!* 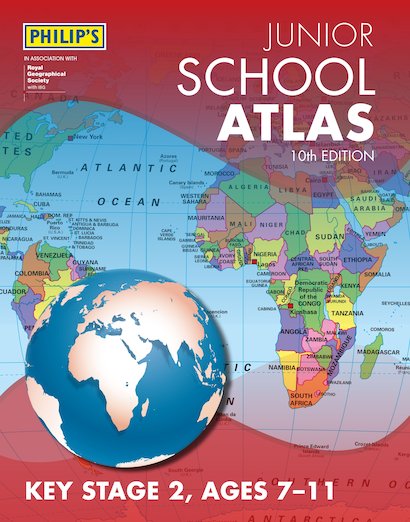 Buy this and your school gets €2.25 to spend on books Orders of €10 or more will earn 20% of your order value back in Scholastic Rewards for your school.

The market-leading atlas for pupils at primary schools, Philip’s Junior School Atlas has been fully revised for its 10th edition. It is a stimulating and authoritative first introduction to the world of maps, and is recommended for Key Stage 2 of the National Curriculum.

The introductory section describes the meaning of scale, how to measure distances using the maps, and explains the symbols on the maps.

The following section is devoted to the United Kingdom and Ireland. Thematic maps cover topics such as mountains and rivers, climate and weather, population and cities, farming and fishing, industry and energy, transport, tourism and conservation. Regional maps of England and Wales, Scotland and Ireland complete this section.

The rest of the atlas is made up of world thematic maps and world continental maps. Included are topics such as the world’s climate, vegetation, agriculture, energy sources, and environmental concerns, such as global warming.

A simple letter-figure index completes the atlas – a useful introduction to help the young reader find his/her way around the maps.

Save 20% on selected books and resources in our September sale!*

Save 20% on selected books and resources for schools, including children's books, dictionaries, non-fiction readers, teaching resources and classroom supplies! Your discount will be automatically applied at the checkout. *Sale ends on 30th September 2020. Offer valid on selected books and resources from our Schools Catalogue, Primary Education Catalogue and Secondary Schools Catalogue (excludes PM, PM writing, Fast Forward, GCSE 9-1 Practice and Revision Guides, Resource Bank memberships and Reading Pro starter packs). Promotion cannot be used in conjunction with any other offer.

END_OF_DOCUMENT_TOKEN_TO_BE_REPLACED
How do I use promotional codes