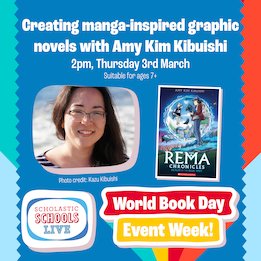 Join Amy Kim Kibuishi, creator of The Rema Chronicles, to learn about the first instalment in the fantasy graphic novel series, Realm of the Blue Mist. Amy will discuss how she creates graphic novels, how manga influenced her, and lead a draw along inspired by the book. 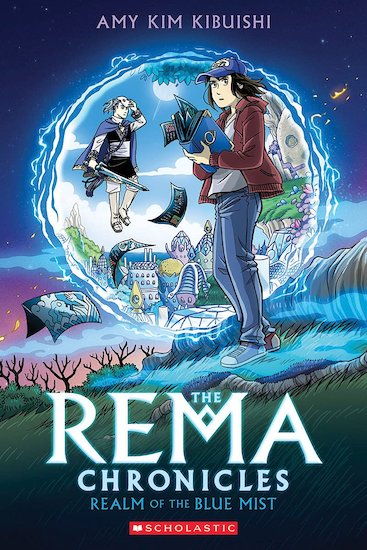 The Rema Chronicles: Realm of the Blue Mist

Enter the rich and fantastical world of Rema in the first instalment of this middle-grade graphic novel series with sweeping adventure and light romance! Tabby Simon is determined to learn what happened to her father, who was found dead after researching a tree that leaks a mysterious mist in her neighbourhood. She is unexpectedly led to Rema, a distant world of magic and beauty that is periodically invaded by a nearby planet desperate for resources. While Tabby searches for the truth surrounding her father’s death, she meets a handsome blue-haired boy named Philip. He has his own dangerous secrets, but he has promised to help Tabby get home. As Tabby learns more about this strange world, she discovers that she is destined for something far greater than she ever could have imagined. The first graphic novel in a fast-paced, highly imaginative fantasy series Includes a big journey, a touch of romance and an undertone of thriller Perfect for fans of Kazu Kibuishi, Tui T. Sutherland and Molly Knox Ostertag.