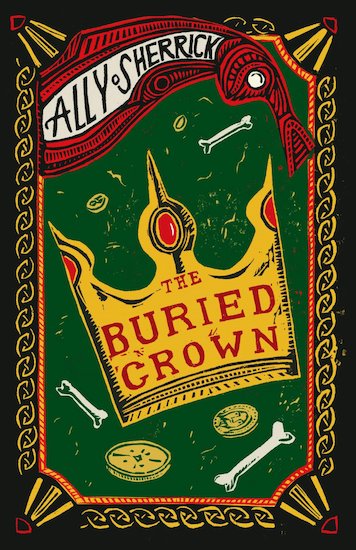 Buy this and your school gets €1.46 to spend on books Orders of €20 or more will earn 20% of your order value back in Scholastic Rewards for your school.

An exciting World War II adventure from acclaimed author Ally Sherrick – blending her trademark rip-roaring historical storytelling with mythology and magic! FROM THE WINNER OF THE HISTORICAL ASSOCIATION’S YOUNGQUILLS AWARD

‘This is a thrilling, atmospheric story full of heart-stopping moments and mystical elements’ PRIMARY TIMES

‘This fast-paced adventure zips along’ BOOKTRUST

‘A stunning historical story embroiled in magic, myth and legend’ THE PHOENIX COMIC

It’s World War II and Britain is on the brink of invasion.

Londoner George has been sent to live in the countryside while his brother and guardian, Charlie, trains to be a pilot - but he’s very far from safe.

An ancient burial ground nearby contains a priceless treasure, a magical Anglo-Saxon crown Hitler is desperate to possess.

Alongside Kitty, the granddaughter of a Jewish archaeologist, George must find and protect the crown from the Nazi invaders before it’s too late …

Takes inspiration from real-life history to create a thrilling story

END_OF_DOCUMENT_TOKEN_TO_BE_REPLACED
How do I use promotional codes