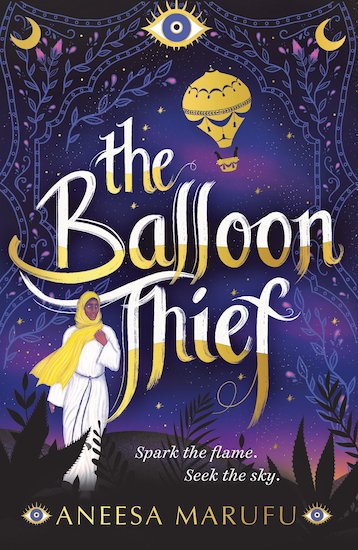 The year’s must-read YA fantasy – ancient djinn, an epic adventure, and one girl’s courage to seek her own destiny ... Burn the flame. Seek the night.

‘Highly relevant yet utterly original, I was utterly entranced by this world of jinn, peris and hot air balloons that ache for the skies.’ LAUREN JAMES, author of THE QUIETAT THE END OF THE WORLD

For Khadija, the only escape from her father’s arranged betrothal is the sky.

When she spots a rogue hot air balloon fighting against its ropes, she leaps at the chance for adventure. Khadija soon finds an unlikely ally in a poor glassmaker’s apprentice, Jacob.

But Jacob is a hari, and Khadija a Ghadaean. The hari are oppressed and restless – their infamous terrorist group, the Hareef, have a new fearsome leader. And the ruling Ghadaeans are brutal in their repression.

Soon, a deadly revolution threatens their friendship and their world. The Hareef use forbidden magic, summoning jinn - wicked spirits made of fire – to enact their revenge, forcing Jacob and Khadija to choose what kind of a world they want to save …

A commercial, thrilling and uplifting fantasy adventure following sixteen-year-old Khadija, who flees her home in a stolen hot air balloon to escape an arranged marriage

Perfect for fans of Noughts + Crosses, We Hunt the Flame and Rebel of the Sands