Missing: The True Story of My Family in World War II 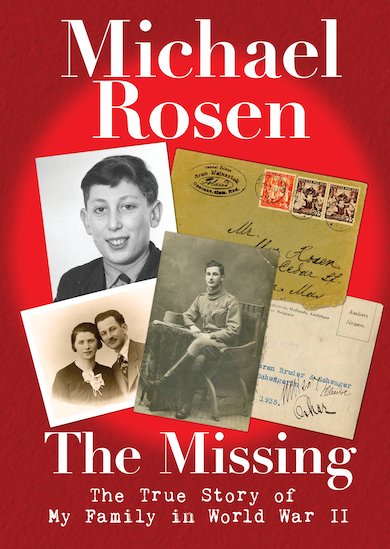 As heard on The Jeremy Vine Show

As heard on The Cerys Matthews Show

“Michael Rosen is a master of pace and clarity… Essential reading.” – The Times, Children’s Book of the Week

“Five stars … extraordinary and affecting. ” – The Telegraph, Children’s Book of the Week

“Rosen handles the difficult topic as sensitively and thoughtfully as you would expect, always writing in a straightforward and accessible way for children.” – BookTrust, the UK’s largest reading charity

A personal, powerful and resonant account of the Holocaust by one of this country’s best-loved children’s authors. By turns charming, shocking and heart-breaking, this is the true story of Michael Rosen’s search for his relatives who “went missing” during the Second World War – told through prose, poetry, maps and pictures.

When Michael was growing up, stories often hung in the air about his great-uncles: one was a clock-mender and the other a dentist. They were there before the war, his dad would say, and weren’t after.

Over many years, Michael tried to find out exactly what happened: he interviewed family members, scoured the internet, pored over books and traveled to America and France. The story he uncovered was one of terrible persecution – and it has inspired his poetry for years since.

Here, poems old and new are balanced against an immensely readable narrative; both an extraordinary account and a powerful tool for talking to children about the Holocaust.

Supported and checked by the UCL Centre for Holocaust Education.

“The Missing may ostensibly concern the Holocaust but, as Rosen makes clear, this is a book about facing down prejudice, defying those who would sow the seeds of hatred and opening our arms to those in need.” – Independent

3813 in Books and Resources for Schools Catalogue 2023