by Jennifer A. Nielsen (author) 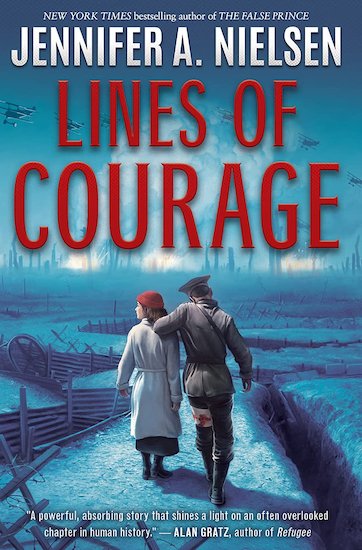 Buy this and your school gets €2.70 to spend on books Orders of €20 or more will earn 20% of your order value back in Scholastic Rewards for your school.

Jennifer A. Nielsen, award-winning author of A Night Divided and Rescue, artfully weaves together the stories of five kids living through World War I, each of whom holds the key to the others’ futures … if they are lucky – and brave – enough to find each other. World War I stretches its cruel fingers across Europe, where five young people, each from different backgrounds and nations, face the terror of battle, the deprivations of hunger, and all the awful challenges of war. Felix, from Austria-Hungary, longs for the bravery to resist Jewish deportations before his own family can be taken. Kara, from Britain, dreams of someday earning her Red Cross pin and working as a nurse – or even a doctor. Juliette, of France, hopes her family can remain knitted together, despite her father’s imprisonment, as the war’s longest battle stretches on and on. Elsa, from Germany, hopes her homing pigeon might one day bring her a friend from out of the chaos. And Dimitri, of Russia, wants only to survive the front, where he’s been sent with no weapon. None of them will find exactly what they want. But the winds of fate may cross their paths to give each of them just what they need. And in this remarkable exploration of World War I by critically acclaimed author Jennifer A. Nielsen, they will discover that friendship and courage can light the way through the most frightening of nights.

Praise for Lines of Courage: “A powerful, absorbing story that shines a light on an often overlooked chapter in human history.” – Alan Gratz, #1 New York Times bestselling author of Refugee.

740L Lexiles are the global standard in reading assessment. They are unique as they are able to measure a child and a book on the same scale – ensuring the right book gets to the right child at the right time.

END_OF_DOCUMENT_TOKEN_TO_BE_REPLACED

Get 10% off when you order 10+ copies of one of our end of term picks. Offer applies to books in our 'end of term gifts' selection only. Offer ends 12th July. Cannot be used in conjunction with any other offer. Excludes purchases made using Rewards.

END_OF_DOCUMENT_TOKEN_TO_BE_REPLACED

Get an additional 20% off when you order 30+ copies of one of our end of term picks. Offer applies to books in our 'end of term gifts' selection only. Offer ends 12th July. Cannot be used in conjunction with any other offer. Excludes purchases made using Rewards.

END_OF_DOCUMENT_TOKEN_TO_BE_REPLACED
How do I use promotional codes