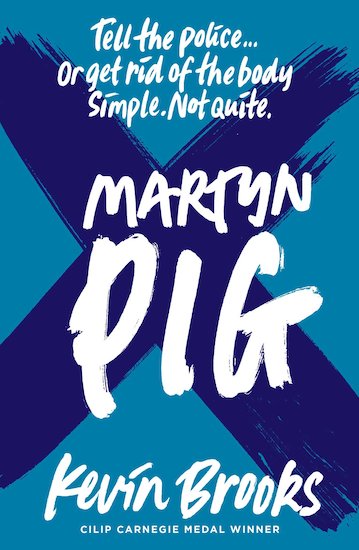 A stunning edition of Kevin Brooks’ celebrated novel - a truly original, powerful and emotional story from the author of The Bunker Diary! ’ ... will keep you gripped.’ The Observer

Martyn hated his dad, but he never meant for him to die. And now he has to tell the police what happened … or hide the body.

Simple, right? Not quite.

One story leads to another. Secrets and lies become darker and crazier. And then everything shatters. Life is never easy, but death is even harder …

A stunning reissue of the Branford Boase-winning novel from Kevin Brooks, author of The Bunker Diary; also shortlisted for the CILIP Carnegie Medal.

Published in over 20 countries and over 250,000 copies sold worldwide!

Kevin Brooks, author of the young adult novels Martyn Pig, Lucas, Kissing the Rain, Candy, and The Road of The Dead, was born in 1959 and grew up in Exeter, Devon. After school, he moved to London and tried to become a rock star. The book he would most like to have written is Cannery Row by John Steinbeck. His most precious memory is of sitting on a wall when he was ten years old, wondering where thoughts go when you die. He decided that they float up into space and become fuel for the sun. His advice for aspiring authors? ‘Read as much as you can, and write what you want to write, not what you think other people want you to write. And don’t give up.’

You can find more about Kevin on his MySpace page and via Bebo at www.bebo.com/kevinbrooksauthor