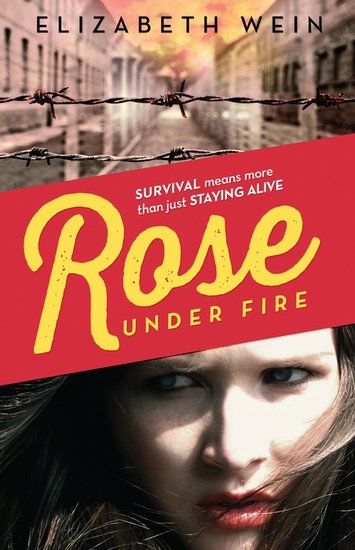 ‘Oh God! All those months of not being able to write! Of not being allowed to write. Knowing I’d be shot if I were caught.’

Nominated for both the Costa Award and shortlisted for the Carnegie Medal, Rose Under Fire tells the thrilling story of one young ATA pilot’s unforgettable journey through World War Two.

Rose Justice is a young American ATA pilot, delivering planes and taxiing pilots for the RAF in the UK during the summer of 1944. A budding poet who feels most alive while flying, she discovers that not all battles are fought in the air. An unforgettable journey from innocence to experience from the author of the New York Times bestseller, Code Name Verity. From the exhilaration of being the youngest pilot in the British air transport auxiliary, to the aftermath of surviving the notorious Ravensbruck women’s concentration camp, Rose’s story is one of courage in the face of adversity.

Elizabeth Wein is a leading voice in young adult historical fiction. Look out for her other books Code Name Verity and Black Dove, White Raven.

Fans of The Book Thief and Carmen Reid’s Cross My Heart will love this.

Elizabeth Wein was born in New York, and grew up in England, Jamaica and Pennsylvania. She is married with two children and now lives in Perth, Scotland.

Elizabeth is a member of the Ninety-Nines, the International Organization of Women Pilots. She was awarded the Scottish Aero Club’s Watson Cup for best student pilot in 2003 and it was her love of flying that partly inspired the idea for her bestselling, award-winning novel Code Name Verity.

“It does more than stick with me. It haunts me. I just can’t recommend it enough” Maggie Stiefvater, bestselling author of Shiver

“I was bereft when I finished it” Jill Mansell

“It’s about friendship and bravery, loyalty and love, and will most definitely leave you sobbing” The Bookseller

“This is a remarkable book” Daily Mail