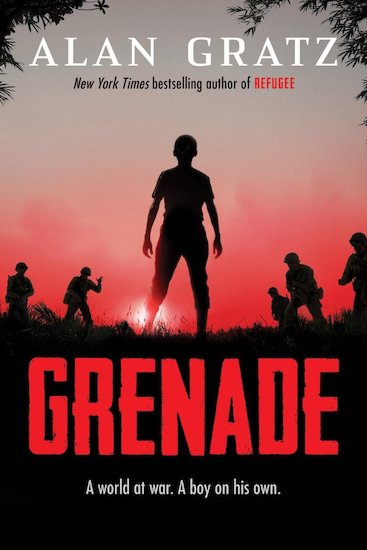 Buy this and your school gets €1.40 to spend on books Orders of €20 or more will earn 20% of your order value back in Scholastic Rewards for your school.

Hideki lives with his family on the island of Okinawa, near Japan. When the Second World War crashes onto his shores, Hideki is drafted to fight for the Japanese army. He is handed a grenade and a set of instructions: Don’t come back until you’ve killed an American soldier.

Ray, a young American Marine, has just landed on Okinawa. This is Ray’s first-ever battle, and he doesn’t know what to expect—or if he’ll make it out alive. All he knows that the enemy is everywhere.

Hideki and Ray each fight their way across the island, surviving heart-pounding ambushes and dangerous traps. But then the two of them collide in the middle of the battle… And choices they make in that single instant will change everything.

Alan Gratz, New York Times bestselling author of Refugee, returns with this high-octane story of how fear and war tear us apart, but how hope and redemption tie us together.

Reviews for Refugee: “An absolute must read for people of all ages” – Hannah Greendale, Goodreads “Like RJ Palacio’s Wonder, this book should be mandatory reading…” – Skip, Goodreads “I liked how the book linked history with adventure, and combined to make a realistic storyline for all three characters” – AJH, aged 11, Toppsta